Where the Laguna de Santa Rosa begins – a special place at risk!

The Laguna de Santa Rosa in Sonoma County, the largest tributary to the Russian River, is an intricate system of wetlands and streams. Its 254-square mile watershed comprises a mosaic of wildlife habitats, from oak woodlands and grasslands to streams, marshes, and vernal pools, that support a wide variety of wildlife. The Laguna was recognized as a Wetlands of International Importance by the Ramsar Convention in February, 2011. It lies on the Pacific Flyway, an important global bird migration route, and includes rare vernal pool areas and critical habitat designated for the endangered California Tiger Salamander.

The main channel of the Laguna begins on the southern edge of Cotati. This Laguna “Headwaters” area has a timeless rural feel to it, with old barns, houses and fields from an agricultural past. Today it has new value as urban open space, and as a de facto greenbelt or buffer area marking the edge of the city. There is a thriving community garden here and pedestrian paths easily accessible from the adjoining urban areas of Cotati and Rohnert Park.

Farmland in the Laguna Headwaters area.

This beautiful area, that many local residents value for its quiet, spacious feel, is also at high risk of urban development. Although currently it marks the southern edge of development of Cotati and Rohnert Park, there is no official recognition of this area as a greenbelt or buffer zone, and therefore no protection for this valuable piece of urban open space. Both City and County zoning designations here allow denser development than the current one residence per 6 acres.

According to the Greenbelt Alliance’s on-line interactive mapper, this area lies in a region designated both “critical habitat” and at “high risk.” 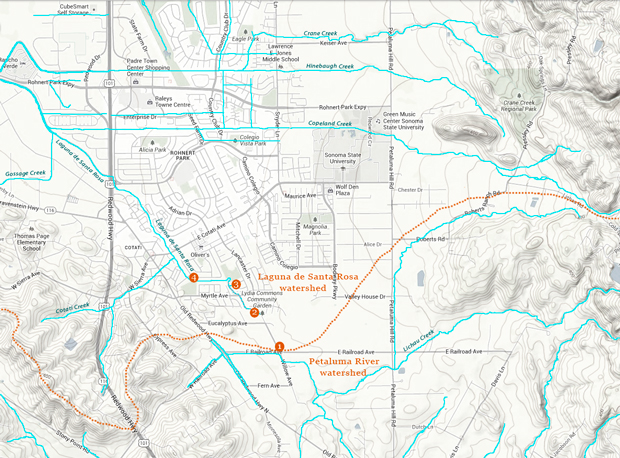