My dog Lucy and I were walking from our property on Eucalyptus Avenue to the Lydia Community Gardens Park at the end of Willow Avenue. As we walked near John Fomasi’s farm on Willow, Lucy, sniffing along the edge of the ditch, suddenly jumped back to the road. I went to the ditch to investigate and heard a loud clicking sound. At first all I could see was high grass in the ditch, but a closer look revealed a fledgling owl!

I usually leave my phone at home on walks but I happened to have it that day and called Sonoma County Wildlife Rescue. They told us to stay there, that someone would be there shortly. We had the company of two young girls from the neighborhood as well as a neighbor and her two little dogs.

It seemed like a long, precarious wait, fearing the owl would hide from us or otherwise be in danger, but Caitlin arrived within 15 minutes. An amazing response!
She told us it was a Great Horned owl that had probably fallen from one of the towering trees on John’s property and was too young to fly back to its nest. She deftly, gently, picked it up and placed it in a box for transport it back to SCWR.

The next day, the Raptor Program director, Dona Asti, called to tell me the owl was in good condition and would be released near its nest within a few days. My spouse and I were window shopping in Petaluma a few days later when Nathan from SCWR called to tell me that he would be bringing the owl back to release it near where it had fallen and asked if I wanted to witness it. Of course!

We rushed home, got Lucy and walked to Willow Avenue. When we looked up in the trees, there were two Great Horned owls, an adult and another fledgling, looking down on us – in broad daylight! None of us had ever seen an owl in the wild except at dawn, dusk or in the dead of night. Did they somehow know the fallen fledgling was returning?

Nathan of SCWR arrived with the owl and gently held him while we looked on from a respectful distance. He spotted its nest and searched for a nearby tree with a branch that was low enough to hoist it on to. He told us it was just a few days from being able to fly, but that it could branch-hop and its parents would still feed it whether it was in the nest or not.

Release! How fortunate we are that these beautiful, wild creatures live within our midst. 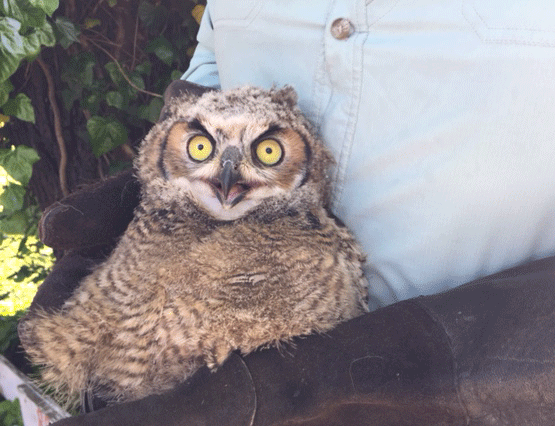 Those eyes – the epitome of wild!
Thank you to Sonoma County Wildlife Rescue for recognizing that, and for their dedication to keeping it that way, in our very special little corner of the world.

This entry was posted in Uncategorized. Bookmark the permalink.