Thousands of years ago, large animals roamed the Laguna de Santa Rosa area, from tule elk and pronghorn to grizzly bears. Ducks, geese and other waterfowl cries filled the air and when they flew, there were so many that large clouds of them darkened the skies. Salmon were abundant in streams and rivers.

On World Wetlands Day, February 2, 2011, the Ramsar Convention named the Laguna de Santa Rosa Wetland Complex a Wetland of International Significance! Since 1971, wetlands all over the world have been designated by the Ramsar Convention to highlight the importance of wetlands and the ecosystem services they provide. The Laguna de Santa Rosa Wetland Complex is the 30th site in the nation to receive this unique distinction.

There is anecdotal evidence that steelhead trout thrived in the Laguna headwaters area back in the 1930’s, before the creek was channelized and culverted.

The southern Laguna lies within a region recognized as critical habitat for the endangered California tiger salamander. It lives in underground rodent burrows and breeds in vernal pools on dark, rainy winter nights.

The western pond turtle is the only indigenous turtle species in northern California. This turtle is a ‘species of special concern,’ which has been found in creeks in the Laguna de Santa Rosa watershed, including in Cotati.

In 1998, Cotati Creek Critters began to plant native trees and shrubs alongside a section of the Laguna de Santa Rosa channel in Cotati. Thanks to a grant from the California Department of Water Resources in 2005, CCC held regular Creek Stewardship Days, involving thousands of volunteers, community groups, and students from Sonoma State University, Santa Rosa Junior College and local schools to plant and maintain over 2,000 native trees and shrubs and thousands of understory plants. Cotati Creek Critters also organized the Indoor/Outdoor Nature Education program, a series of indoor presentations and outdoor walks, bike rides and field trips to raise awareness of nature in our own backyard, develop a sense of place, and encourage environmental stewardship. These events were complemented by a monthly column in the local newspaper The Community Voice.

In 2009 three interpretive signs were installed alongside the Laguna in Cotati, which together tell its story. 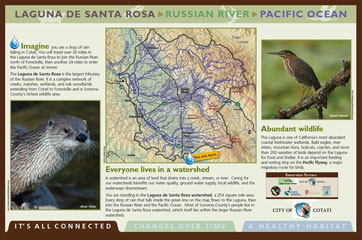 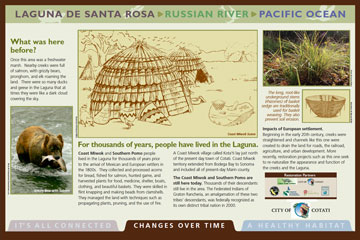 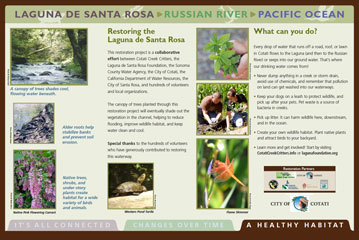 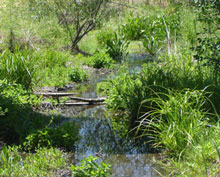 Watershed: an area of land that drains to a creek, stream, or river. Watersheds nest one inside another from the smallest to the largest scale. (Copeland Creek watershed lies within the Laguna de Santa Rosa watershed which in turn lies within the much larger Russian River watershed).

Wetland: a land area that is saturated with water either year-round or seasonally. Wetlands are valuable ecosystems that provide multiple functions. Like a sponge, they absorb rainwater and release it slowly over time, which helps it to sink into the groundwater, refill the aquifers, and reduce flooding downstream. They’re rich with wildlife, from the tiniest microscopic creatures that feed bugs, which in turn feed fish, then birds or mammals – and so on up the food chain to the larger predators. 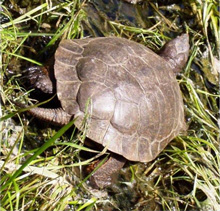 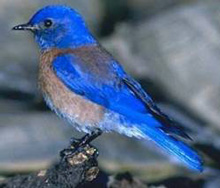 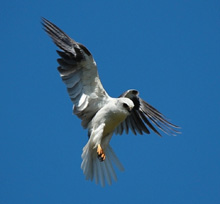