Right on the edge of town, where residential Cotati and Rohnert Park meet rural tranquility, is Lydia Commons, a thriving community garden bursting with green plants, fruit and vegetables, and piles of mulch and compost. There’s a children’s playground with swings and a slide, picnic benches, and a bulletin board. The area is well used by walkers from the neighboring urban areas, who enjoy the sense of peace and quiet and rural open space. There is a potential for future regional walking and bicycling trails, including northwest along the Laguna de Santa Rosa to Sebastopol, and east to the SMART railroad trail.

This area has been used for small scale dairy farming for over 60 years. The old barns and chicken sheds are signs of the area’s agricultural past. Cows still graze in some of the fields, and nearby is a small goat farm.

Lydia Commons, a thriving, neighborhood-based community garden, was established by local residents in 2009, with the support of the City of Rohnert Park and St. Joseph’s Health System, and is located in a mini-park in one of the older areas of Rohnert Park. Walking paths connecting Cotati, Penngrove and Rohnert Park converge at the Lydia Commons site, so garden members can walk to the garden from all three areas. The garden shares a 1.3 acre parcel with a small playground and open area used as an informal dog run. Plots are cultivated by individuals for their own use and in summer there is a Free Box for sharing extra produce. The garden has helped revitalize the park and increased visitors by 40%, while vandalism and crime in the park area has greatly diminished. Non-gardener neighbors have gotten involved in improving and maintaining the park on a regular basis.

Recreation & Education in the Headwaters Area

This area is a focal point for the community. For many local residents in the more urban areas of Cotati and Rohnert Park, this is their nearest area of open space. An informal walking trail connects this area with the Laguna de Santa Rosa trail, while another leads east to the railroad. Neighbors use the trails for walking, dog-walking, running, and bicycling; gardeners contribute to the garden and share their produce. There’s a playground, and picnic benches. For the past few years, the garden has been the venue for an annual potluck birthday celebration for neighboring Farmer John who has lived in the area since 1953.

Further “downstream,” at the beginning of the main Laguna de Santa Rosa flood control channel near Liman Way, Cotati Creek Critters has been restoring native habitat since 1998, including engaging the local community in planting 2,000 native trees and shrubs, thanks to a grant from the California Department of Water Resources in 2006. Their community education program has included talks and presentations, guided walks, and bicycle rides, including guided walks to the historic Laguna headwaters area.

Over the whole watershed, the Laguna Foundation works to conserve, restore and inspire greater public appreciation for the Laguna de Santa Rosa, which is a Wetland of International Importance. The Foundation sponsors walks, talks, classes and outings; it has many opportunities for volunteers and a newsletter and special events for members.

The Laguna Headwaters area is an important crossroads for connecting long-range bicycle and pedestrian paths. A Class I north-south bike trail is planned for the entire length of the Laguna, connecting Cotati to Sebastopol, the Joe Rodota Trail, the West County Trail to Forestville, and other trails in the northern part of the Laguna. To the southeast, the trail will connect with the 70-mile long SMART trail, which will eventually run from Cloverdale to Larkspur.

Solid green lines on the bike map below show existing Class I (off the road) routes while dotted green lines show where future paths are planned. 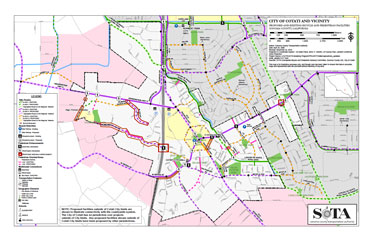 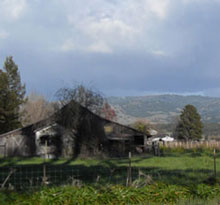 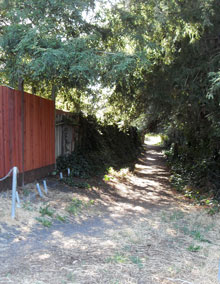