The landscape of the upper Laguna de Santa Rosa before European settlement probably consisted of seasonal wetlands with grasslands and scattered oak trees. There was once a chain of lakes along the Laguna. A remnant of the southernmost one still exists, in a mobile home park in Rohnert Park!

The upper Laguna is fed by streams from the hills to its east, which used to flow into a seasonal wetland – a system of swales, vernal pools and stream beds. Those wetlands dried up completely in the summer. The clay soils of the plain around Cotati and Rohnert Park held winter runoff in pools and small lakes, making a large wetland of this area in the winter and spring which reverted to grassland in the dry season.

The source of the main Laguna de Santa Rosa channel in winter (left), and in summer (right).

Some views of the Laguna Headwaters area in winter 2017 with natural water flow channels re-asserting themselves.

One of the first actions of post-Gold Rush settlers was to begin to drain the winter wetlands and use that land for agriculture. The chronological series of maps below are taken from a paper by Arthur Dawson and Christina Sloop, who compared old documents of the Laguna watershed’s upper end with its existing ecology to piece together the ways in which water flow (hydrology) has changed over the past 150 years. As these maps from 1867 through 1980 show, stream channels were cut through the flatlands so that water would run off into the Laguna. These straight channels (in some places concrete-lined ditches) now pass through urban areas. The idea was to “pave it and pipe it,” to get the water out of town as fast as possible.

This change in water flow patterns has consequences which contribute to problems that we are wrestling with today. Rainwater flows quickly through the straight channels, increasing downstream flooding and not allowing water to soak into the soil to recharge groundwater aquifers. The rapid flow of water through the system picks up urban runoff from storm drains on the way, along with pollution and sediment, then deposits them in the Laguna. These new conditions make it harder for salmon farther downstream in the system to spawn and survive. They also encourage the growth of Ludwigia, an invasive water plant.

In general, ditches immediately to the south of Railroad Avenue take water south towards the Petaluma River. But this area is so flat that it almost seems as if floodwaters cannot quite decide whether to flow north to the Laguna or south to the Petaluma River! Local landowners have mentioned observing this phenomenon: as the waters swirl over their land, even the slightest obstruction in a ditch can change the water flow from north to south, or vice versa. There are times when Lichau Creek, normally a tributary to the Petaluma River, has burst its banks and flowed north into the Laguna instead. Likewise, during big floods, Copeland Creek overflows and sometimes becomes a tributary of the Petaluma River rather than the Laguna; its waters ending up in the Bay rather than the Russian River.

The Making of the Laguna de Santa Rosa by Jane Nielson 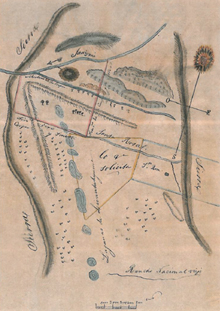 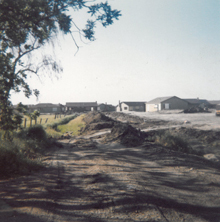 The original Headwaters area being dug up and ditched in 1972-4 for a new development. 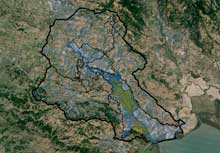 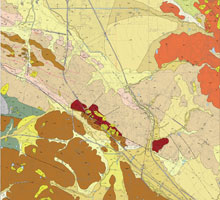